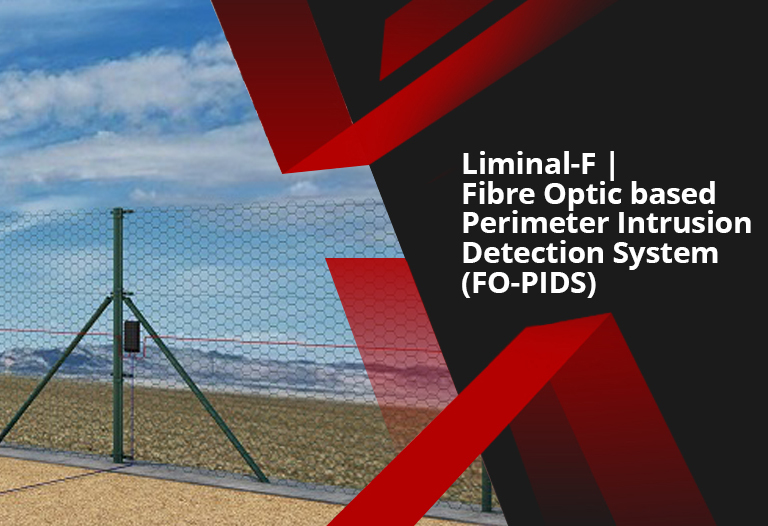 The principle on which this advanced perimeter intrusion detection system is based is the interference of light signals travelling through the optical fibres. These fibres can be conveniently laid over a wall, a fence, or even under the ground.

The functionality of these optical fibres remains unaffected even on being exposed to sunlight, high temperatures, rain, moisture, and/or dust – making it environmentally robust.

Now that we have the basics in place, let us move forth to understanding the technical aspect. FO-PIDS are electrically passive sensors as they carry no electrical current and are therefore immune to any kind of Electromagnetic Interference (EMI) and Radio Frequency Interference (RFI).

Primarily, FO-PIDS uses optical fiber as the sensing element through which an optical beam is sent. An intelligent signal processing algorithm combined with powerful electronics helps detect any disturbances in the optical beam caused as a result of attempted intrusion in the form of cutting, climbing, overcoming through a tunnel underneath or a step ladder over the fence.

The system ensures that intrusion alarms and warnings are generated to alert the authorities concerned regarding the occurrence of intrusion attempts and their location in the relevant protected area.

Let us take a closer look at this new-age Perimeter Intrusion Detection System and what it has to offer!

The Liminal-F Fibre Optic based Perimeter Intrusion Detection System is meticulously designed in a way that it can detect almost every possible attempt of intrusion, including but not limited to –

In fact, it can also detect and signal external activities near the fence such as running, brisk walking, vehicle passing or tree cutting.

The Liminal-F Fibre Optic based Perimeter Intrusion Detection System senses the vibration transferred to the fibre by changes in motion and/or pressure in the vicinity. These changes are received and processed by the intelligent algorithms inside the device along with management software. A noteworthy aspect here is that a single mode fibre is used in the Liminal-F system for communication as well as detection.

For deployment, the perimeter can be segregated into manageable zone lengths of up to 1,500 metres. Up to 16 zones can be monitored through a single hardware device and can be managed by a single instance of management software

The system is equipped with NO/NC dry contacts which enable a wide range of security equipment to link up with the system. It can also be connected to external alarm units or surveillance mechanisms. Upon detecting a TAMPER or INTRUDER signal, the Liminal-F communication and monitoring unit will exercise the NO/ NC contacts to perform their respective tasks.

Liminal-F Intrusion Detection System is designed using a passive sensor system that does not require a power supply in the deployed field, making it both environmentally sustainable and truly cost-effective to operate.

Liminal-F Fibre Optic based Perimeter Intrusion Detection System – as the name suggests – is used for surveillance of areas where critical monitoring of security is required. These areas include –

Liminal-F is accompanied by system software for the device operation, zone management, alarm indication and warning system to provide a real-time alert of the intrusion attempt. The Alarm Handling software is centralized to manage multiple devices over a LAN network. Hence, you can rest assured of managing the following aspects from the comfort of a computer

Depending on your application, preferences and budget you can choose for one or more of the alarm devices that will help you stay on top of your game –

Depending on the size of the sensors and the application, Liminal-F is available in two variants –

Liminal-F DZ is a compact all-in-one system suitable for 2 zones. It is housed in an IP-67 grade enclosure allowing itself to be mounted directly on the fence/wall.

Liminal-F MZ is designed to be modular. It is a standard 19-inch 4u rack mountable version with several slots for add-on cards. One unit with 8 pairs of optical Transmitter and Receivers add-on cards can cater up to 16 zones. When the number of zones is fewer than 16, the requisite number of add-on cards need to be mounted into the enclosure.

What Do You Get?

In addition to the FO-PIDS sensors, you will be provided with the management software for the device operation, zone management, alarm indication and warning system.

Not to mention, you can opt for the deployment of the system through the trained technicians at A-1 Fence Products. The fence can be deployed in one of the following ways, depending on the needs and preferences for your property –

We hope that you are now well aware of all the aspects of the new-age fibre-optic based intrusion detection system that Liminal-F is.

If you wish to get this robust surveillance system installed in your premises, or simply wish to have some questions answered, feel free to get in touch with our team at +91  8291136650 or email us at sales@a1fenceproducts.com

Rest assured, you will get the best assistance and the most effective solution for your intrusion detection needs.

Next Post Benefits of having Honeycomb Fence over Chainlink Fence