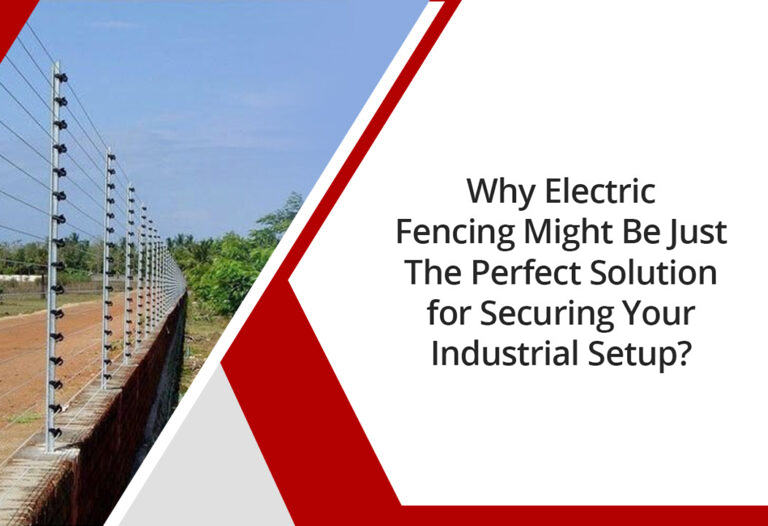 More often than not, an Industrial Setup spans across thousands if not millions of square feet area, and keeping such a massive area safe is not a mean feat! While there are numerous fencing options available in today’s day and age, most are capital intensive and may not be financially viable for an area as large as a manufacturing facility. It is at this point the good old electrical fencing comes to the rescue, and shoulders the responsibility of safeguarding your property in the best possible manner!

Before we head on to understand precisely why electrical fencing proves to be an effective solution, let us understand how it works.

Usually, an electrical fence system comprises of five elements – ground wires, live wires, posts with insulators, a grounding rod and a charger/energizer. The live wires are mounted on posts that are placed at equidistant from each other. The charger is mounted at a cool, dry place and is connected to the live wires, via the ground wires. And this whole system is brought together with the help of a grounding rod. What makes this setup truly enticing is the fact that you can adjust its voltage based on the expected intruders or predators, thereby ensuring the utmost safety of your assets.

Now that you’re aware of the function of electrical wire fencing, let us move on to assess the benefits that it entails.

Modern-day electrical wire fencing is either made of galvanized aluminium, zinc or stainless steel which ensures it lasts significantly longer than the traditional fencing wire. Besides, electrical fences are not prone to rust or to becoming brittle thereby requiring little to no maintenance, even in the long run. All you need to do is to ensure that the charger stays clean and dry at all times and that there is no vegetation growing on the fence wires, and the fence will keep serving its purpose for a long time to come.

Almost all fence structures right from cement walls to wrought iron fencing, from chain-link fencing to twin mesh wire fencing can be easily modified to incorporate electric fencing. This implies your setup can seamlessly get the add on of  electrical fencing without much effort, time or money!

What’s more? Simply adding an electric fence over your existing fence structure can ensure that no intruders climb over. Deploy the electric fence under a security fence and you can rest assured that crawling under is also not an option for the trespassers.

Unlike barbed wire and concertina coil fencing, electrical wire fencing is incapable of causing injuries, as it delivers a painful but definitely non-lethal and safe shock to human or animal intruders. Not only does this make electrical fencing ideal for remotely located industrial set-ups but also for farms that need to prevent their livestock from wandering off. Since the impact in case of electrical fences is largely psychological, both intruders and property owners are better off testing electrical fences.  Electric fences comply with IEC 60335:2:76 standard making it completely safe and legal to use.

Not only is electrical wire fencing significantly lighter as compared to other security fencing solutions, but it also requires a fairly less number of parts. This ensures that electrical fencing requires lesser posts, and can be easily set in the ground without any need for aggressive digging! The T-posts and inverse insulators required for electrical fencing are fairly easy to transport, install and uninstall as and when need be, making them highly preferable for enterprises that may need to change locations ever so often.

When an intruder tries to cut the electric fence wires, or short them using a conductor, or tries to separate the wires using insulating items to create enough gap to pass through, the energizer is smart enough to detect this and raise a powerful alarm. This can alert the security guard and scare the intruders away. What’s more, you can also get alarms if someone tries to tamper with the energizer, or cuts of the power to the energizer

As industrial setups can have large perimeters, Just getting an alarm is not enough. You also need to know  where the intrusion has happened.  Modern day electric fence systems can split your parameters into multiple zones thereby indicating the area from which the Intruder is trying to enter.

A lot of industrial areas in remote areas and could have irregular electric supply. Security electric fence systems come with a different battery backup of 12 to 24 hours making sure that your security is not compromised even when there is a power failure.  As the whole system is powered by a 12V dc battery, it is possible to charge the battery using solar power,  thereby reducing your electricity bills in the long term.

As electric fences work mainly as a psychological barrier,  it requires very little Steel making it economical as compared to other Steel Fences. The electrical consumption of the energizer is also equal to 50 W (one tubelight) and hence is very economical to operate. By adding an electric fence you can reduce the number of security guards thereby reducing your overall operating expenditure.We hope that you are now on board with the idea of installing electrical wire fencing around your industrial set up! So, if you are ready to jump ship, make sure to check out A-1 Fence Products for one of the most high-quality and cost-effective electrical fence solutions around!

The answer is a partial yes because, in the present day scenario, it is equally viable to achieve the earth return path via earth wire, as it is to maintain the electrical flow by making a complete loop.

As there are no moving parts, electric fences have a very long life. The elements that are exposed to the environment have proper protection embedded into them during manufacturing. For example, the wires are duly galvanized which ensures it has a long life, but at the same time ensures that it gives a good shock. Poles are galvanized and powder coated for excellent corrosion resistance. All insulators are UV stabilized to provide protection against harmful UV rays present in sunlight. Lightning diverters protect the energizer from lightning during rains.

While an electric fence is designed to give short-term, low intensity shocks to dogs or other wandering animals, it can only cause a little pain. Unless the animal gets completely entangled in the fence, there is almost no possibility of death.  As Fences from A-1 Fence follow international standards, the design is such that no animal or human can get entangled into it, either intentionally or unintentionally.

During or after heavy spells of rain, there can be a minimal loss of voltage, albeit only in electrical fences with low quality insulators. Fortunately, when you source your electric fence from A-1 Fence Products, you won’t be facing any such issues. In most cases, the performance of electric fences only improves due to rains, as earthing becomes better in moist soil and the intruder/animal gets a powerful shock to remember.

Why Electric Fencing Might Be Just The Perfect Solution for Securing Your Industrial Setup? Score: 0 / 5 (0votes)
a-1 fenceelectric fence
The Author
Published by

A-1 Fence
View all posts by A-1 Fence
Related Posts
Read more
Previous Post Architectural Gabions – 5 Reasons Why They Should Be a Part of Your Next Project!